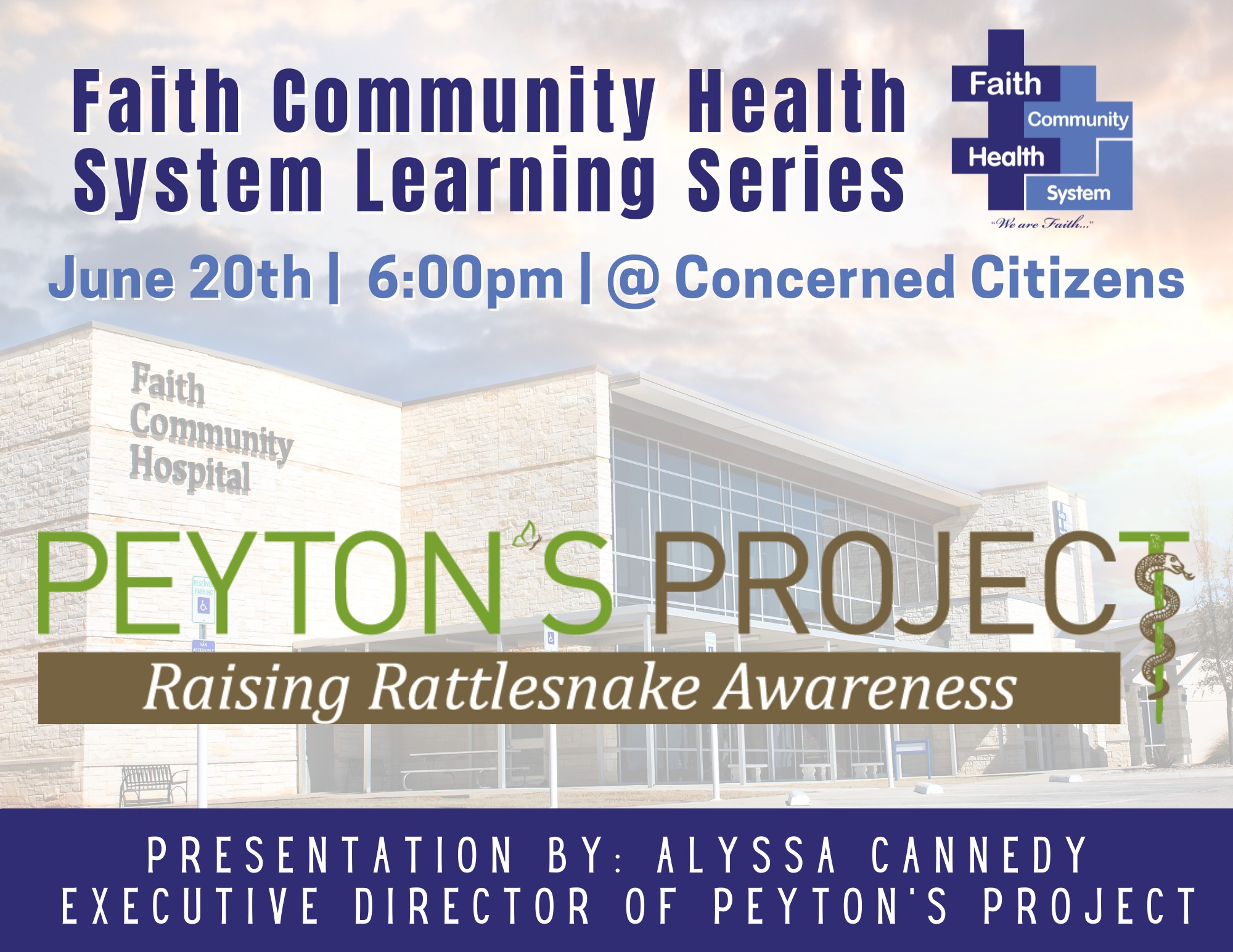 With summer in full-swing, it is more likely that people will be outdoors and more susceptible to a snake bite. There are definitely snakes in the grass in Texas, as well as in other parts of the terrain. In fact, there are more than 75 species in the state and about 15 are potentially dangerous to humans because of their venom.

For residents of Jack County, rattlesnakes are the most common venomous threat, and knowing what to look out for and how to respond in the unfortunate instance of a rattlesnake bite can make the difference between life and death.

This is where Peyton’s Project comes in.  Named for Peyton Hood a Texas toddler who died of a rattlesnake bite, the nonprofit organization seeks to educate the public about the reality – and dangers – of rattlesnakes.

“It can happen very quickly and you may not even realize that you have been bitten. Many snakes can be elusive, so it’s typical for bites to happen so fast that victims won’t know what happened. Responding to a snakebite quickly and appropriately is critical, especially for people in rural communities. One of the main goals of Peyton’s Project is to make sure rural hospitals are supplied with antivenom.

According to the Centers for Disease Control and Prevention (CDC), about 7,000 to 8,000 people per year get bitten by venomous snakes in the U.S. The good news is that very few—as little as five per year—actually die from this. Signs and symptoms of snakebites may vary, but victims most typically notice a pair of puncture marks at the center of the wound; redness, swelling and severe pain around

the bite; nausea, increased sweating and labored breathing and numbness or tingling around the face or limbs.

Remembering the color, shape and/or pattern of the snake can be crucial to choosing the appropriate treatment method. Although, again, these incidents usually happen so quickly that victims are often unaware that they were even bitten, making it impossible to capture these details.

If you or someone you know is bitten by a snake, seeking medical attention immediately is critical in avoiding long-term or terminal damage.

But knowing how to respond at the scene until medical aid can be rendered is crucial!

Unlike what many believe and what people may have seen in movies, a tourniquet should never be applied to a snakebite. Snake venom can often cause massive swelling of the affected area and destroy red blood cells, and if the blood flow is blocked, dead blood cells in the affected area essentially become trapped, causing more harm to the victim than the bite itself. Also, any constricting shoes, clothing and jewelry should be removed.

Other mistakes to avoid after a snakebite include slashing the wound with a knife, sucking out the venom, applying ice, immersing the wound in water and drinking alcohol or caffeinated beverages.

Faith Community Hospital’s partnership with Peyton’s Project includes a program in which the hospital maintains vials of antivenin at all times. Medical emergencies, while never ideal, can also be very expensive. Treatment for a venomous snakebite is no exception. Our partnership with Peyton’s Project, in addition to highlighting the dangers of venomous snake bites, is helping patients reduce their cost of treatment to just a fraction of what they normally would have to pay in case of such an unfortunate incident.

In the event of a snakebite, you are urged to call 911 or get to a hospital as quickly as possible.  Not only rattlesnakes should be on your watch list but also copperheads, cottonmouths, coral snakes and other pit vipers.